Facebook is feeling a bit of heat lately (understatement of the year?). But even with all of talk of #deletefacebook and reports of declining usage, the truth is the vast majority of people are still on it and using it very regularly.

Many of those people will be your donors.

Facebook’s new algorithm is throwing up new challenges to lots of nonprofits (especially those without the luxury of having big budgets for advertising).

M+R posted a great update about how the new algorithm seems to be working.

The main takeaway: The only way to beat the algorithm (without paying) is to post actually engaging content.

It’s actually really easy to figure out how engaging your content is, too – thanks to their nifty calculation:

Jump into M+R’s article and check out the Clap, Talk, and Share scores for more specific engagement measurements.

M+R’s April benchmarks study will have the baseline Facebook engagement score for nonprofits – luckily that’s not too many sleeps from now.

You can get a pretty good idea of what’s resonating with people (and what might work on social media) by tracking the right metrics and following best practices.

But yeah, I highly recommend you check out M+R’s blog post for more on this.

P.S. If you’re a Firefox user, you can now use this extension to prevent Facebook from following you around the web. 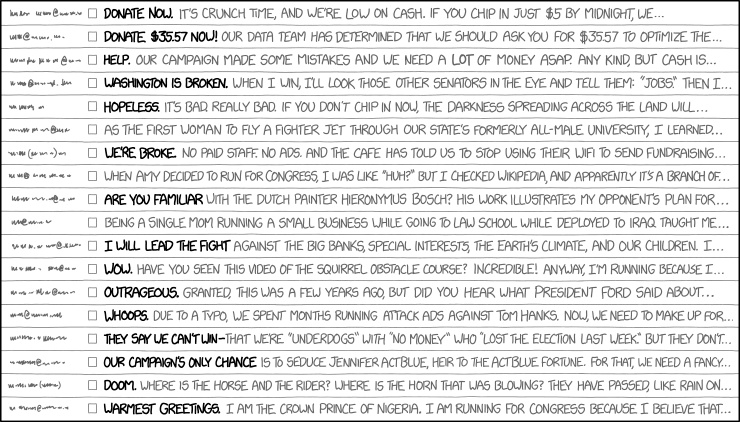 The Trust Equation was introduced to me last year by my friend Hanna and it’s really stuck with me since.

First, a quick intro to the Trust Equation.

The equation is made up of four variables:

Credibility has to do with the words we speak. In a sentence we might say, “I can trust what she says about intellectual property; she’s very credible on the subject.”

Reliability has to do with actions. We might say, “If he says he’ll deliver the product tomorrow, I trust him, because he’s dependable.”

Intimacy refers to the safety or security that we feel when entrusting someone with something. We might say, “I can trust her with that information; she’s never violated my confidentiality before, and she would never embarrass me.”

Self-Orientation refers to the person’s focus. In particular, whether the person’s focus is primarily on him or herself, or on the other person. We might say, “I can’t trust him on this deal — I don’t think he cares enough about me, he’s focused on what he gets out of it.” Or more commonly, “I don’t trust him — I think he’s too concerned about how he’s appearing, so he’s not really paying attention.”

Add Credibility, Reliability and Intimacy together and then divide by Self-Orientation. It ends up looking like this: 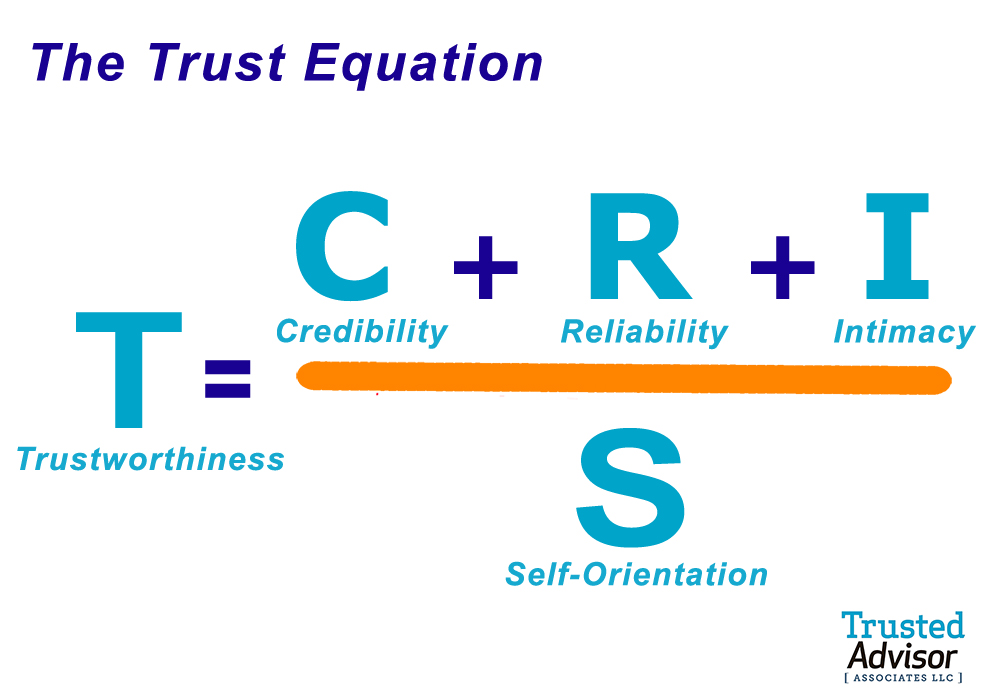 If you remember fractions at school, you want those ones across the top to be as high as possible, and the one of the bottom to be as low as possible.

The equation is mostly geared towards individual behaviour. But it’s totally relevant to organisational behaviour too.

I think you’ve got an opportunity here to run your own organisation through the Trust Equation.

Totally honestly, I don’t even think you need to assign values to each variable – it’s just helpful to know that the top line should be high, and the bottom should be low.

The Trust Equation for nonprofits:

Credibility for your organisation is what you’re saying to people about the work you do and how you’re positioning yourself. This encompasses pretty much all of your outgoing comms (including fundraising).

Reliability is whether or not you actually deliver on what you say you do. This is one of the easiest areas you can improve as an organisation: report back on how you’re spending donations. Show the impact you’re having in the world.

Intimacy is about people. High levels of intimacy are why peer-to-peer fundraising does so well. It’s why so many nonprofits invest in major donor officers. But even if you don’t have those resources, you can create intimacy with people by telling stories about people. Be transparent about finances. Make people feel like they know you at more than just a surface level.

Put a human face on your organisation and don’t keep secrets.

Self-orientation is how much you’re looking out for your own interests vs. the interests of the people your non-profit is set up to serve. How much do you talk about how you can make your donor’s vision of the world become reality? Because that’s literally why people give – they’re giving through your organisation to make their dreams come true.

All of this sound kinda familiar? It’s essentially the basis of donor-centricity. It’s about just doing the right thing as an organisation that literally exists to help other people.

How to find out where you stand

Ask people. Survey your donors. Call them to say thanks and then have a chat. Set up a focus group. Make time to learn more about how people perceive you – because their perceptions of you are their reality.

Revisit your baselines each year.

Trust doesn’t improve overnight – it takes months or years of repeated actions to build up trust.

Be critical with yourself as an organisation. Look at the equation variable-by-variable. You may discover there are some areas where you can quickly make changes to improve.

Do some testing. You’ve set your baselines, so focus on a variable in the equation and see how certain things improve trust – and results. Take self-orientation as an example. Try talking about yourself vs. talking about your donors and the people they can help. Reducing self-orientation is a no-brainer to me and the results from that experiment should be super clear.

Give it a go and let me know how you get on or read more about the Trust Equation here.

(p.s. Wanna learn more about how you can use the Trust Equation to make your fundraising better? Come to my full day workshop at #WCFC2018)